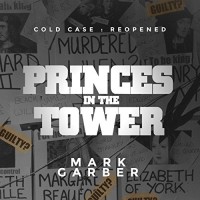 If Patricia Cornwell’s work on Jack the Ripper is an example of how not to write an argument, this book by a former detective is an example of how to write one. Honestly, it is worth assigning to any class that has to write an argumentative research paper. Garber presents a rather good case and takes the reader step by step to his conclusion. In this way, the reader is privy to the investigation.

It is possible that my problem with the book does not apply to the print version. I “read” the audio so there are no footnotes. I wish that Garber had given more detail into how he reached his analysis of the character of Elizabeth Woodville and Elizabeth of York. Just saying something doesn’t make it so, and a little more detail in the book itself wouldn’t go wrong. But if the print version has footnotes or endnotes that might be dealt with there. I do also wish any historian would give a more detailed analysis of the supposed Richard and Elizabeth of York affair. Rumor doesn’t really equal truth, and considering religion and family ties or closeness, I’m not sure I buy the affair idea.

But those aside, a good read for any Tudor fan.