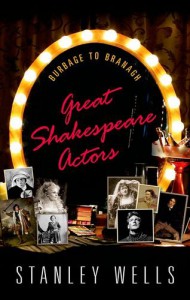 Stanley Wells is one of the best sources of Shakespeare critical work.  Everyone knows Bloom, but in some cases Wells is better because he, in many cases, combines the viewer and the professor.  This offers brief discussion of the acting abilities of actors (and actresses) associated with Shakespeare, starting with his contemporaries and working into the modern era.

The description of the various acting skills and styles as well as the influence that each respective actor has upon a role are both well discussed.  However, in some cases, a bit more biographical data about the various people would have been appreciated.  It is clear that the book is intended for a somewhat general audience because biographical information is given about Shakespeare, and if that is the case, then why isn’t biographical information give about some of the less known but still influential or popular actors?

Additionally, why are the actresses described in terms of looks more than the actors?  While Wells does play attention to the physical attributes of male actors, this is primary done in the pre -1950s group.  Even when Wells is describing a modern actress , say Judi Dench, he comments upon their looks.  It isn’t down in a condescending way but it is interesting because there is less comment about the male actors’ looks.

It is also strange that he ends with Branagh and doesn’t mention, even in passing, more recent productions, say David Tenent’s hamlet.  Admittedly, though, it is not as strange as neglecting to mention Bram Stoker when dealing with Henry Irving and Ellen Terry.

But aside from those reservations, the book is entreating and a good tour of acting and the Bard.  Wells gives attention to first – including the first African (Black) American acting company as well as the first Black man to perform Shakespeare on a regular basis.  He discusses in depth who the first woman actor in terms of Shakespeare was, and there is enough discussion about style to make interesting to an actor, reader, and enjoyer of Shakespeare.