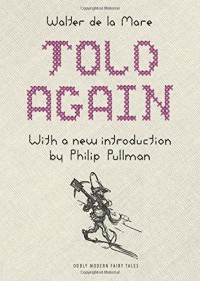 Okay, I have to ask what the hell Phillip Pullman has against Dahl’s version of Little Red Riding Hood because I love it.  We need more girls to know that version than Walter de la Mare’s.

Sorry, had to get it out of the way.

This collection is de la Mare’s retellings of famous fairy tales, mostly from the Brothers Grimm, and if you though the Grimms cleaned things up too much, you are going to think that de le Mare has some type  of mental illness.

It’s strange, though, the tales that aren’t source from the Grimms tend to be the better ones.  De la Mare adapts Aesop’s “Tortoise and the Hare” for the British child, making it “The Hedgehog and the Hare,” and it is a very charming tale.  It’s the best one in the book.   The retelling of “Bluebeard” is better too though it wanes a little at the end.  De la Mare has a thing against beautiful, vain, and dumb women.  Honestly, one of those shows up, you know something bad is going to happen.  The retelling of Dick Whittington is good too, though the cat becomes male for some reason.

There are some beautiful descriptions in the stories.