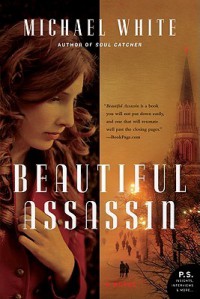 This book would be really good if it dropped the love story at starts to develop late in the second half of the novel.  While care is taken to develop it, it doesn’t quite fully work.

Beautiful Assassin is the story of Tat’yana, a woman and a sniper in Russia during the Second World War.  Because of her beauty and her amount of kills, she is sent to the US, to try to rally support for the war.

The most compelling part of the novel is the first part.  This takes place during the German invasion of Russia when Tat’yana is shooting.  When the focus shifts to her presence in the United States, the manipulation is well shown, but the section is weak by a love sub-plot that never fully gets off the ground.

Still a rather good novel.