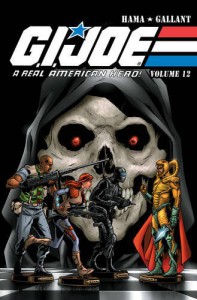 I think, though I am not sure, that this volume includes some issues that haven’t been released in the main market yet, so I am going to try to avoid spoilers.

If you have read G.I.  Joe as opposed to simply watched it, you know that in many ways the heart of the comic series has been Snake-Eyes and Scarlett.  In this issue, as the title implies, so it’s not really a spoiler, seemingly kills off Snake-Eyes.  You have to give Hama credit for making what is an extremely unpopular move, if the posts on the internet are any indication.

As someone who read Joe during its Marvel run and is finally getting back in to it, what unnerves me most about this issue isn’t Snake-Eyes death (if death it is, there are some strange clues in here), but the character of Scarlett, who while still strong here, seems a little weaker than in her Marvel run, and her reaction to Snakes’ death seems a bit off.  And the whole Joes are nothing without Snakes seems a bit false considering who the Joes are.

Still, it’s not a bad comic and there is pretty of action.  It’s great seeing Cover Girl get more play.  The Joe remembrance of Snake-Eyes was particularly poignant, in particular with Stalker and his reaction as well as the use of Timber.

2015 comic book and such netgalley arcs