I still want a hedgehog 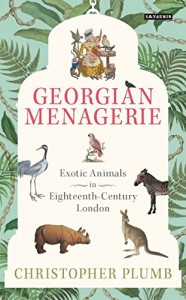 I’ve always wanted a tiger, but I’ve always not wanted a tiger.  Tigers are beautiful animals, but do you really want an animal that will never fully be tame and could just kill you by accident?   How many times does your cat scratch you?  It’s also true that this is all relative.  If I lived in a place where a leopard could just walk into my bedroom, my view on leopards would be different.  Honestly, I don’t understand why people go ga-ga over baby possums, and squirrels are rats with fluffy tails.

Humankind, however, as long had a fascination with animals, in particular with animals that are exotic to the viewer.  Today, we tend to go to zoos (even if we are conflicted about them) and watch television to see such beasts.  While some people might still have exotic pets, most people don’t, unless it is a bird, and sometimes animals that were once exotic are no longer so.  Would you, for instance, call an elephant exotic?

We tend to forget the impact that new discoveries and arrivals can have on people.  And no, I’m not talking about the panda twins.  We get excited about the birth, but that sense of newness isn’t quite what it once was.

And it is important to remember that when reading Plumb’s book about the arrival of new and unusual animals in Georgian England, in particular London and the impact such beasts had on the public.  Imagine being able to own a kangaroo.  That’s one of the stories that Plumb starts with, a kangaroo delivery gone bad and then gone good.  In many ways, the way the Georgians viewed animals isn’t so far removed from how we view them today.

Plumb details the various aspects of how the animals were received.  Starting with the popularity of canaries, moving into the use of civet musk and bear grease and ending with the political story of the Queen’s Ass (a zebra), Plumb shows that while the animals were part attraction, part make-up source, they were also part discovery.  He points out that touch was an important part of the experience.  Something that still occurs today, even when the animals are largely roped off from the people, you still have people trying to get closer or the zoo ambassadors with the petable animals.  It’s that sense of wonder that we still have that tie us to the Georgians.

Though we also, perhaps, have some cruelty in common as well.  There is the story of the elephant kept in a room.  Perhaps, the zoos today don’t look so bad now, huh?   The bear that was misfed.  But there are also stories of humanity - the drayer who defended a kangaroo, the wills made out to insure the safety of pets.  Perhaps we owe our current relationship to the groundwork laid down by those back then.

Plumb’s book is divided into sections – moving from private owners to business men to the crowd’s reaction.  It makes for fascinating reading.  It is also encompassing.  Various classes and their relationships with beasts are used.  Plumb presents the story of a rich woman ensuring her bird’s well treatment after her death, but also the story of bird dealers who struggled to make a profit.  His tone is engaging and details he gives are not supercilious.  Most of the focus is on birds and mammals, reptiles make a few appearances.  He also presents, to a degree, the shift to zoos; in part because of the rise of science.

If you are interested in animals or in London history, this is a good book.