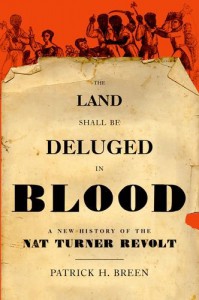 Before reading this book, I had known of Nat Turner’s rebellion, but only in the most general sense.  In my American history classes, we spent time on it, a little more than we spent on John Brown, but the nitty-gritty and the areas of debate were largely left untouched.  Therefore, when I saw Breen’s book up on Netgalley, I decided to read it.

In all, it is a gripping read that shreds light on an event that every American should know more about.