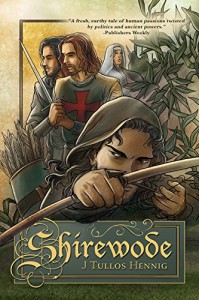 The only reason why my reaction to this book is mixed is because I did not read the first volume, and it’s the type of book where reading volume one would be helpful, if not entirely necessary.

That said, it’s actually a retelling of Robin Hood that will resonate with Robin of Sherwood fans.  If ROS was a blend of the Saxons fighting back against Norman overlords with old beliefs, such as Herne, than Shirewode is a rightfully successor.  If you are thinking of the recent BBC incarnation, this might not be your cuppa.

Henning makes use of the idea of chosen king, May Queen, and summer knight, though the use of them is far different than Butcher, and perhaps closer to the actual mythic figures that the real outlaws melded with.  The central characters are Robin, Guy of Gisburne (also Gamelyn), and Marion.  The other minor players are here as well – John (with a hint of ROS about him), Will Scarlet, and Much (who may not be a miller’s son).  Gisburne is hired to hunt down Robin Hood, and in process he must come to terms with his past, something that he believes he has forgotten.

To say there is a back story is an understatement.

The story is compellingly told, and presents an interesting view on saints and sinners.  There are plots and counter plots, and everything works.  The story itself is believable and the relationship between the characters is drawn pretty well.

It’s a different take on the legend, but it works.  While some characters are given expanded roles, this isn’t done at the cost of other characters.  It’s enjoyable.