Covers Quite a bit 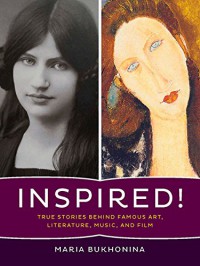 Bukhonina’s book covers several famous artists and the inspiration, usually women though in some cases men, that inspired them. She deals not only with artists in terms of the literal sense of the word, but also writers, musicians and film makers. In some cases, she focuses more on the inspirational person than on the artist.
The book starts off with Alexandre Dumas’ father includes Mata Hari, Marie Dupleiness, and Doyle. Among these more well-known individuals, Bukhonia also includes the true story of Billie Holiday’s “Strange Fruit”, theater manager Renee Harris, Suzanne Valadon, as well as Hachiko, Japan’s famous loyal dog. She also includes people who might be polarizing, such as Hattie McDaniel who can be a polarizing figure because of the roles that she portrayed.
It is to Bukhonina’s credit that she includes women whose lives inspired and women who were more like muses – think of Picasso or Dali’s relationships with their perspective women. She also does not shy away from mentioning the more abusive aspects of some of the relationships.
At times, though not often, the style is somewhat like a checklist. Mention this, mention that, mention this. There is also a point where it is not quite clear that she is talking about Alexandre Dumas fils or the more famous Alexandre Dumas, his father.
Yet despite the fame and well known histories of some of the subjects, the book does an excellent jump and makes for exciting reading. It is an enjoyable, enlightening, quick read.