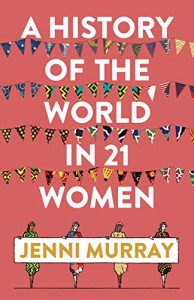 We love lists.  We make shopping lists, reading lists, to read lists, movie lists, and on and on.  Any book or article that publishes a list is going to get called on that list.  So, let’s get that bit out of the way.

Murray’s list of 21 women starts in Ancient Egypt and goes to Cathy Freeman.  There is a total of eight women of color, three from the US, and two from France and Russia.  Every continent is represented, except South America, which is a bit annoying.  Bonus points for having Australia represented by an Aboriginal woman.  There is a nice mixture of women in the arts, politics, and sciences.  It’s true that a reader does wonder why some lesser known women aren’t mentioned, why, in some cases, the standard women are trotted out.  And couldn’t a woman from South America make the list?  But all the women either were or are highly influential, usually in more than one field.

But quite frankly, it was so wonderful to see Toni Morrison here, and she isn’t the only artist.

Jenni Murray, host of BBC’s Women Hour, details 21 women using an amazing personal voice as well as with a good critical eye.  At times her personal admiration really does shine though.  Honesty, Merkel, c’mon, let Murray talk to you, basically so she can ask you if you really did read Playboy to understand Trump.

Murray also does not whitewash the flaws in the women.  IN fact, at times, she notes her own conflicts with some of the actions the women take – for instance Queen Isabella’s prosecutions of Jews.  She handles Bhutto’s political history deftly.  The tone of the writing is totally engaging, and the book is quite easy to dip in and out of.  It is as if you are listening to Murray present on the radio.

The portraits of each woman are incredibly lovely.