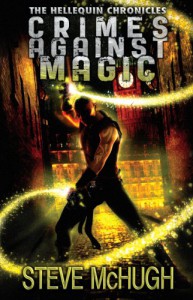 I might not have been in the right mood for this considering what is currently going on in the US politics.

It is a workable fantasy.  It is part Burn Notice, part Dresden, part James Bond.  Apparently every single beautiful woman finds Nate undeniable and is willing to drop her bra and panties for him.  At least, every woman of legal age.  To be fair, Nate does look upon girls as girls, and the sex is totally consenual - far beyond the loose Bond defination of that word.  Its just, at least for me, an eye rolling really.

But this would have been fine because the first half of the book is at least servicable urban fantasy, even a cut above because Nate does not try to soft pedal what he is, and he is at least honest.  The sections that take place in the past work in terms of laying down a longer plan and connecting the story to a larger mythos.

The world building could have been a little bit more work.

The second half of the novel falls a bit apart into a somewhat standard damsel in distress plot line that just feels like women manipulating men to fix problems.  I'm more in the mood for women to be kicking ass.