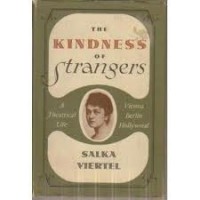 I really don’t know much about Greta Garbo.  I know the “gossip” of her lesbianism or bisexuality.  I enjoyed Queen Christiana and I few other movies.  Like Marlene Dietrich in many ways it was what she did doing the years of World War II that weren’t movies that were far more interesting.   So, the name Salka Viertel didn’t ring any bells.

Viertel was a very close friend of Garbo’s, but she was also a screenwriter, working on quite few Garbo movies’; in fact, their creative collaboration seems to have started with Queen Christian, mostly because both women found the queen fascinating.

Viertel was born in Sambor which at the time of her birth was part of the Austro-Hungary empire.  She was Jewish and lived to see both World Wars.  She worked first as an actress until a journey to America, where she and her husband went to work in the film industry.

The selling point that seems to be used for the book is whom she knows in Hollywood.  There are stories about various Hollywood stars, and Viertel seems to have known a great many people, including various family writers, such as the Manns.

The most interesting aspects of the memoir are not the stories of people you’ve heard of, but of the personal side.  Viertel, for instance, writes about what today we would call post-partum depression.  There are passages about relationships.

Not much about Garbo.  The friendship takes a back seat in the memoir.

At times there is a frustrating vagueness that could be eased with some footnotes – such as the tragedy that is used in reference to her relationship with her niece.

Yet, it is a very modern memoir that gives insight to times of the past.