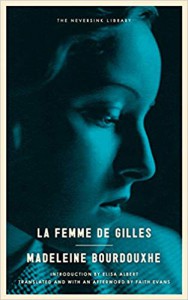 There is a type of tale called Patient Griselda.  It basically goes like this – high ranking man marries lower class woman, he then subjects her to all types of “tests”, such as saying they are divorced, hiding their marriage, sending her away, - the final “test” is to request that he marry his own daughter by the woman.  Of course, he doesn’t go through with the marriage.  The point is to test the woman’s obedience, for she agrees to everything without a whimper making her the perfect wife.

Obviously, the story isn’t very popular today.  Most reader might want to give her a sword or a gun. But at on time, the story was considered good.  I think this was because at that time people only counted men but I could be wrong.

La Femme de Gilles is in many ways a response to that tale.  The title is important, literally the women (wife) of Gilles, Elisa.  She loves him very much; in fact, she seems to define herself by this love.  Even thing is fine until Gilles has an affair.

On the surface the short novella is about the disintegration of woman who realizes that her marriage is not what it was, but also, she is not what she was.  The work is more than that.  Both the afterword and introduction note that what drew some attention was how Bourdouxhe treated female sexuality.  This is true for the women in the book desire.  And the other woman’s sin isn’t in the sex, its in who she choses to have sex with, who she chose to wield her power over.

What is most interesting is the response to the idea of patient Griselda, and even how we see women who have been betrayed by their husband today.  Take for instance, Hilary Clinton.  On one side, there were people who wanted her to leave Bill because of his affair.  On the other side, there were people who said that if HRC were a real wife she would have kept her husband, the affair was her fault.  If HRC, or any betrayed woman in the public eye, gave away to rage where people could see, the word shrew at the very least be tossed about.  We might all be on Beyoncé’s side when the story about Jay-Z hit, but how many people would have judged her harshly if it had Beyoncé cussing out Jay-Z instead of Solange.  Even when we belong in the its-their-business-don’t -care camp we ignore the cost of betrayal to the woman, unless like some artists that cost is made public, and even then, that is a public face not the internal one.  Bourdouxhe is writing about the internal destruction that the knowledge brings beyond the everyone knows.

It is the interior life of patient Griselda who can’t show it because the cost is too high.

It is a shattering book.