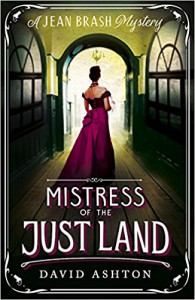 One of the reasons that I loved the Mclevy series on the BBC radio was Siobhan Redmond’s portrayal of Jean Brash, mistress of the best bawdy house in Edinburgh (actually most likely the world).  This book, written by the BBC series’ creator/writer David Ashton, takes place before the close of the series and focuses mainly on Jean Brash solving a crime that occurred in her business.  She is not happy about this.  Hannah Semple, of course, is Watson to Brash’s Sherlock.  Mclevy and Mulholland make appearances as well.  We get more about Jean’s past as well as how she runs her business.  The lives of some of her staff also get some more development.

It would be fair to say that my enjoyment of this book was enhanced because my mind read it to me in the voice of Siobhan Redmond (and honesty that is a reason to get the audio), so this is a good companion to the radio series.  I would recommend listening to at least some of the series’ first.

Like the series, the book does an excellent job bringing the reader to Leith, to the stews.  You are not hanging out with Christie’s Marple or Poirot, or even the great detective himself.  You are with a much earthy company who, as Ashton notes, use razors instead of Excaliburs.  The drug of choice isn’t the Seven Percent solution but a more caffeinated beverage.

If we can’t have more BBC radio series of Mclevy, this series is a worthy successor.