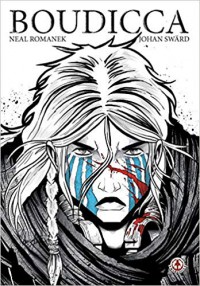 A graphic novel retelling of the story of Boudicca you ask. Sign me up, I say.

Neal Romanek and crew do an excellent job of bringing the story to life.

First, the artwork is stunning. I mean, look at the cover. The lack of coloring in the novel works. The use of black and white only makes the already powerful story even more powerful. There is wonderful detailing in some of the characters, and the scenes where nudity is involved are not those “let’s make the female character into a sex object scene”, if you know what I mean.

The plot is good, though the edge has to go to the art. In part, this is because of the frame used to tell the story. Quite rightly, the druids are brought in. Yet, telling the story in large part though the filter of a young druid, a man, shifts the emphasis away from the fact that a woman did it. Part of this is because there are men talking about how the Queen is grieving and not in her right mind. Of course, she isn’t, but discussing her that way cheapens the story as does the suggestion that she brought it on herself. It isn’t quite “grief drove her mad and she brought it on herself” trope, but at times it is uncomfortably close. Additionally, making it something of almost a romance at the end doesn’t quite work either.

However, those objections, though real, are not enough to ruin the story. While the fate of Boudicca’s daughters is slightly different here than the norm, it is still a very possible fate. (The rape is implied and happens off panel). The rage and pain that Boudicca feels at various points in the story are brilliantly portrayed both in the terms of writing and of the artwork. The battle scenes are awesome. There is even Roman politics at play and those are always fun to read about.