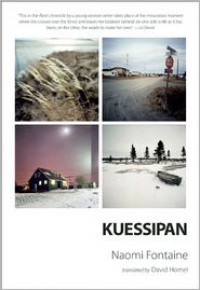 Early in her novel, Fontaine writes, “. . .the grey skin of a man who is too young for the varnished wooden box with its gilt pattern and golden handles” (13).  A beautiful and tragic sentence, which in many ways sums up this slim novel.

It isn’t so much a novel but more a collection of prose poems about the life of a reservation.  The characters, if that is the right terms, are nameless and, for the most part faceless, but that makes it more powerful.  The episodic, poetic style is like that of Split Tooth and Niirlit, both of which are pre-dated by this book.  I wonder if it is capturing of narrative oral story telling in written form.

It is also a mediation on nature and a way of life that is threatened, a need to find a sense of self where a world does not value the traditions and lives of one’s people.

“Tonight, neither the city nor the airplanes colour the sky with a soft purple as sinuous as a wolf” (26).

Part of the loss is the encroaching of Western culture, of the arrival of non-Indigenous people to lands that were free of lights of cities.

“Three hours of chaos to reach the intimacy of a lake much too beautiful to remain hidden, but too remote for most human eyes” (20)

There is so much to unpack in that sentence.  The beauty of nature, the fact that not many will see it, the belief that people should see it, as well as the knowledge that too many visitors will ruin it.