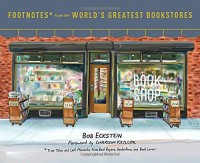 From the World might be pushing it since about 17 are from NYC.  He even had bookstores in NYC that were closed.  I mean come on.  (He does include a few bookstores that are closed which beggars the question why - simply because of an interesting story?  But not every bookstore mentioned has an interesting story.  Quite a few are simply general statements, so it's a bit strange).  It is a celebration of Independent Bookstores (used or new) so I get why big chains aren't mentioned but cities besides NYC have bookstores.

Selection is also a bit hit or miss. I can understand the inclusion of many of the bookstores (Powell's, The Strand) - but seriously why isn't Foyle's mentioned? Or Kramerbooks in DC? Or Joseph Fox here in Philly? The Word in Montreal perhaps?  Paragraphe in Montreal as well isn't mentioned.  Politics and Prose or Busboys and Poets isn't even mentioned.  (Both are in DC).

Not mentioning Joseph Fox is a sin.  I mean that store provides the books for the library book signings in Philly.  It's small, but oh so dangerous, and the staff is so great.  All you have to do is say I read about this book but I can't remember the title.  And they know what book it is.  They even keep dog biscuits for pooches.