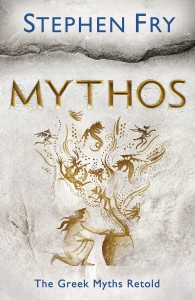 Disclaimer: I received an ARC of the American edition courtesy of the publishers via Netgalley.

When you really think about it, the Greek myths are about a very dysfunctional, screwy family.  Cannibalism, incest, rape, bestiality – Greek gods do it all.

Stephen Fry’ Mythos is a chronicle of Greek myths, focusing on the gods, so there is no Troy in this volume.

Fry writes like he talks – and this is a good thing.  To a person who has read anything about the Greek Myths already, the stories are familiar.  What makes this edition at least worth a read is Fry’s use of language and turn of phrase.  He pokes fun at names, takes a strange joy in describing someone juggling testicles, and comments about various degrees of parenthood that the gods model.

If you have listened to Fry do anything, you can have him narrator the book in your mind and it works so well.

There are Terry Pratchett worthy footnotes – the type that contain information and will make you snort milk out of your nose.  You can learn about the meaning of names as well as connections to modern times or about virgin births.

The book is lavishly illustrated with photos of famous art depicting certain events and figures.  The artwork ranges in age from ancient Greek to modern works.

The afterword includes more information such as myth vs religion and what exactly ancient Greece was.  There is also a source listing.

It is a good introduction to the Greek Gods in a fun way.