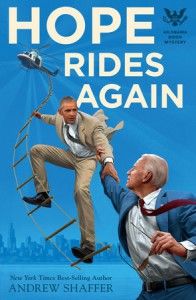 Hope Rides Again is the follow up to Hope Never Dies which is a mystery told from the viewpoint of Biden and featuring Obama.  The first book used romance tropes to highlight a bromance, the second book turns that aspect down a bit but is still funny.

Look, it’s not Shaffer’s fault that Biden is going around telling young girls that their brothers have to watch out for them.  That’s Biden being a man of his generation.  I’m not excusing the ick factor or the sexism in the statement, I’m just noting that it isn’t Shaffer’s fault.  And there is a line in the book that will raise an eyebrow because of the unwanted touching.

That said, it is a fun read.  There are several laugh out loud places.  Like about Air Force Two.  Several “no he didn’t just write that did he” places.  And when I read the author’s bio bit to my friend as he was cutting up chicken, he laughed so hard he almost cut himself.

So read this away from sharp objects.

Or at least don’t use sharp objects while you reading this.

Dull knives might be okay, though why you would be cooking with a dull knife is your business.

In this installment (which is in a blue book, and the first was red, so we are missing a white one . . . just saying), Biden is catching up with Obama in Chicago to talk to a donor.  What begins as a quest for a missing phone becomes a mystery involving local Chicago politics but also addressing violence, urban issues, and societal evils.

In other words, Biden is being schooled to a degree about what it means to be a black man in Chicago.  Is it a true social commentary?  No, but it is definitely more of one that was in the first book.  There is also a brief riff about the question of change and urban development.

The specter of the Orange Sprayed one is less heavy in this one, which is probably while the book feels lighter.

If there is a specter it is Oprah, who goes to brunch with Michelle, who has a great line directed at Biden.

Yep, Michelle is in it too.