I read this. Now you don't have to. You're welcome. 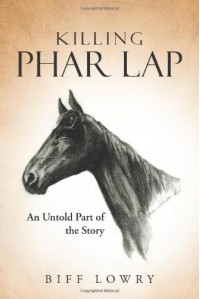 I love Phar Lap. The movie, omg, the movie. I have read some of the sources that Lowry says he used. I love my Phar Lap Breyer model. I've long subscribed to the murder theory. Okay? I'm not convinced Lowry's wrong. I am just not convinced he's right, and this book is a mess.  Honesty it is just as bad as whatsherfaces book about Jack the Ripper - Cornwell, that's her name.  And I didn't think that was possible.

Why is it a mess?

1. Padding. Way to0 much padding. I think the bits about the Kennedys and King were there to show the idea that the mob can kill people. Unless it was there to suggest that the Daddy Kennedy was in on the plot to kill Phar Lap. Though why killings that occurred so many years later prove something about a horse, I don't know. He even mentions Lincoln. Like because Booth killed Lincoln that means all Yanks will kill horses (okay, he doesn't actually say that but he comes close).  Additionally, there is a whole chapter about a boxer who went to the US and died. While Lowry says he wasn't murdered, he implies that the boxer was. The boxer at least is a contemporary so his inclusion makes sense, though a whole chapter feels a bit much.

2. For some reason, Lowry feels it necessary to point out that the Yanks can't really deny killing Phar Lap because we have crime, more than our share. Um, okay? So there is no crime in New Zealand or Australia? Oh, look a few pages later he talks about how some Aussie people cheated at horse racing. So, nope? It's fine that he doesn't like the US or Yanks, but that was a seriously stupid sentence.

3. The facts that Lowry presents in the book are not foot noted or cited in the body of the ticket. Additionally, while he lists sources, in many cases the source listings are general. Something like say Online Press or Wikimedia. Not impressed.

4. Lowry does rely on interviews, but it is unclear if Lowry did some, all or none of the interviews. This annoying because much of his "proof" comes from one man.

5. Much of the proof comes from one man who was a boy when Phar Lap was staying at the ranch. It is unclear how old, though looking up the man and doing the math, he would have been 8.. It also should be noted that some of what makes its way to a young boy's ears might be changed or misheard. For instance, a woman claims that her husband and the doctor are killing her. The boy hears this and believes this but he lacks the knowledge about her condition that an adult would have. I'm not saying man is wrong or lying, but one person's memory isn't enough to go on.

6. Back to the sources - one person is listed because she is a historian for the area and loves Phar Lap. I'm not sure entirely how loving Phar Lap makes her an expert.  Plus, quoting Shakespeare in this type of book does not qualify as a real rebuttal.

7. Lowry keeps tooting his own horn about how shocking and groundbreaking, nay controversial, his theory is. He does this like 20 times before he even really gets started. Sadly, it is none of those three things.
8. Conversation not coversations.