True Crime that would work for bingo 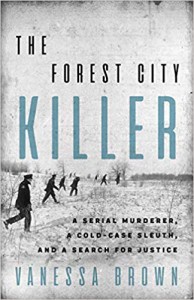 If you are American (and maybe if you are not), Brown’s book is going to remind you on some level of the Golden State Killer. Which is strange because the only thing that the two books have in common.

Brown’s book details the unsolved killings of young people, mostly girls, in Kingston Ontario that occurred in a period starting the 1960s. While Brown does work as a bookseller, she is also a knowledge local historian. She brings a local’s knowledge to the story, and this is invaluable when she is discussing not only the geography and public transit but also the family and society structures and norms that existed.

Brown may not be a formal reporter, but she is aware of her inexperience and in many ways, her curiosity lends itself to the reader, and her sympathy in particular for the families, does not feel intrusion. The information was gathered not only from newspaper articles and reports, but also from interviews and private papers. While at times she does use the pronoun “I”, the personal intrusions are kept to a minimum and, for the most part only there to indict an inability to contact a person, find information, or to provide an local’s insight on a place or a bus route (considering how many people fail to realize buses don’t always run 24/7 this is important).

I do wish that Brown had a little more context or criticism about the judgment that occurred to some of victims, in particular those women who were not virgins. There is a bit, so she does take it into account. It’s just more a personal preference issue.