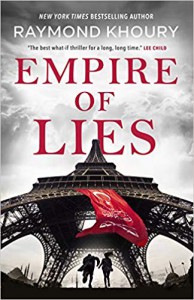 Disclaimer: I received a free ARC of EMPIRE OF LIES by Raymond Khoury from Macmillan in an exchange for an honest review.

People like to play what if. It’s a fun game. In some ways, it is a safe game. It requires us to think but not think, if that makes sense. Khoury doesn’t do that.

In his book, the Battle of Vienna is won by the Ottoman Empire, and this changes the fate of Europe, well most the world really.

Time travel is involved too.

Kamal lives in Paris, a Paris that is not quite like ours, for it had been conquered by the Ottoman’s years ago. He is an officer, who is a bit too fond of his sister-in-law, who is a lawyer. Kamal’s job is to keep the empire safe, for the Ottoman Empire never fell. There is still an England and an America, but they are different. And, to be honest, not all the ways are bad.

But then Kamal finds out why and it shakes his world in more ways than one.

The book is a cut above most time travel stories. One of the questions at the center of the novel is which history is better. The villain of the piece, the mysterious strange in the summary, he’s not all bad. He’s a villain that has some very good and valid points – he is a product of the history he has lived in, in the same way that Kamal is the product of his time and place.

Khoury’s use of history and character is what sells this book. The amount of detail and well thought use of cause and effect makes Kamal’s world totally and utterly believable. What is more when the debate about what to do occurs. Is the bad guy completely wrong? In terms of a philosophical debate Khoury does really explore it.

While the earlier part of the book is a little slow, and this seems to ensure that the world building is staying on solid foundations, when the book decides to gallop it goes. It really is a thrilling thriller. Khoury does not pull punches. The plot and details work. It is a fun galloping read.