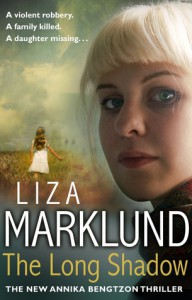 The Long Shadow finds Marklund’s heroine Annika going through a period of change. As she is recovering from what seems to be an irrevocable breakage with her partner and father of her two children, she must also deal with the changing face of the newsroom, including a change in her status as well as a new direct superior. Then there is a murder in Spain that ties into

It’s somewhat upsetting that Marklund isn’t more readily/easily available in the United States (Red Wolf, which is not the first in the series was the first published in the U.S.), especially when one considers the popularity of all other Nordic thrillers.   This book seems to be more closely tied with others in the series, though it is not necessary to read the preceding ones before this – I know, I speak from experience. Like the girl with the tattoos, Annika is somewhat disconnected from society, if to a lesser degree. The lesser degree is nice because Annika does actually have a friend or two, a woman she can take to, if not about personal issues, than work issues and they back each other up. Annika also has her children who she loves.   Unlike Sandler, Annika does acknowledge her behavior and the effects it has on those around her as well as herself. Whether or not she will actually stick to the small changes, she resolves to try is another matter, but she has a degree of self awareness that few Nordic heroes have as well as a idea or decision to change – not to conform, but to make her life easier. She takes responsibility in a way that though tortured thriller or mystery heroes actually do.

The plot of the novel hinges on more the Swedish community in Costa del Sol but on drugs and money. It is global in scope and the missing daughter is not only half of it, though it is this connection, this missing child, that drives Annika, that arouses her instinct of what a good story it can be, something that her boss in the newsroom disagrees with.

In many ways, the newsroom issues, Annika’s job and her interaction with her co-workers, are some of the most interesting parts of the novel. It reminds one of the final season of the Wire, with its close up at the newspaper industry. It is also depressing. America isn’t the only place with dumb down news, if Marklund’s portrayal is accurate.

Marklund’s novel does have violence; Annika’s life is touched by it in more than one way and several characters outside of the victims also have violent pasts. However, unlike many other mysteries/thrillers where the violence is directed almost elusively towards women and has a sexual undertone to it, the violence in Marklund’s books would occur to the victims (who are both genders) regardless of gender. Annika, for instance, is targeted because she is an investigative reporter and not a woman. Perhaps it is sad that I find such use of violence refreshing, yet there is something nice about a book where women are not the only victims, were they are active and actually interact with each other as equals.