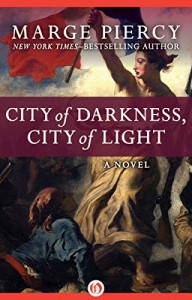 Perhaps the most common thing every nation in the world shares is its ability to leave people behind when progressive change occurs.  Abigail Adams reminded her husband to not forget women when America was being founded, and of course, he did.  Women helped in World War I and they still didn’t even have the vote.  There are still debates about whether African-American women should put men’s rights before all

rights.  In fact, that is not doubt true for any minority culture or ethnicity in any country.

So it is should be of no surprise that the French Revolution, which included the famous picture of a bare-breasted victory (and let’s really think about why she is always half nude), neglected the women who were a large part of that revolution.

Piercy’s book chronicles the lives of Paris citizens as they struggle in the days leading up to the Revolution and the days after it.   While the majority of the characters she follows are women, there are more than a few men.  The book is a rather cynical and somewhat hopeful look at revolution and change.  Piercy’s book is worth reading because she covers all walks of life.  There is Pauline, a young woman in Paris who has her own small business, a chocolate shop.  This isn’t Chocolat, so the emphasis isn’t on the wonderful food and treats that she produces.  It is on the politics and how Pauline gets caught up in.  Is Revolutionary Paris, revolutionary enough?

And that really is the question.

Most often grand sweeping historical novels that are suppose to focus on the little person, really do not.   They might start out that way, but plot and readership interest, always cause said little person to become part of a coterie of upper echelons.  It is to Piercy’s credit that while some of her characters cross over, not all of them do.  In many ways, it makes her historical fiction far more believable and compelling.  While she does focus on the movers and shakers to a degree – both Danton and Robespierre have a role or two – the focus is kept on the smaller players.  The everyday people that many readers of such books would have been.   It really does feel like the stews of Paris at some points.