Re-read after watching the movie Everest 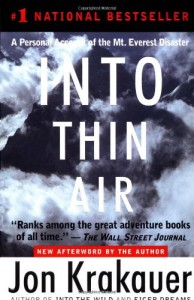 I have a suspicion that Krakauer might be a bit of a jerk in real life, and I will admit I sometimes wonder why many of his books have a strong me bit. Yet, he is an immensely talented writer. He took some heat for this book. I should note that I read the earlier addition, the paperback version of the book that came out in about year after the events, so the later afterword is not present. In this version at least, Krakauer doesn't seem too harsh about the socialite, noting that despite her attitude her fellow climbers, in particular man who he respects, respected her. Does she look like a saint? No, but I wouldn't call it a hatch job. He isn't particularly nice about describing some of his fellow climbers' skills, yet I think this is a human failing. He is as harsh about himself. And one does get the feeling that he blames himself. At the very least, the book is a good starting point for a discussion involving clients and climbers and whether that should even be an option for mountains like this one.

I got this book intending to give it to my brother, then I started it. I couldn't put it down.

Added 12/19/12 - Engrossing. Krakauer took some heat (too put it mildly) for his article. Also deals with the question of reporter and subject. Krakauer blames himself as much as anyone, so it does feel like a brutally honest book.