Out in April - Pre-order away 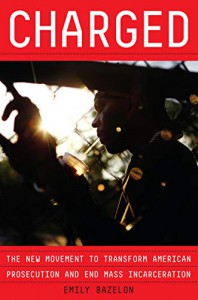 Disclaimer: ARC via the publisher and Netgalley.

The last time I did my civic duty of jury duty it was either the day after or day that Larry Krasner fired several lawyers for the DA’s office. It was an interesting day. I’m not sure why they didn’t just cancel us coming in.

I tell you this so you know that I live in one of the cities that Bazelon writes about in her new book.

According to the studies that Bazelon cites in her book, most Americans agree that the justice system needs to be reformed and that in many cases the penalties are too harsh. True, there are some people, like one of my co-workers, who believe people like Krasner haven’t been victims of crime so they don’t care about punishment. But as someone who has lived in a city with harsh penalties, they don’t seem to work that well.

Bazelon makes an excellent and good case as to why this is as well as detailing how the country got to this point. Her book follows two people who are caught in justice in different parts of the country. There is Noura who is accused of murdering her mother, and Keith who is charged with an illegally holding a gun. Noura is white, from Memphis, and her family, well not rich, is not poor. Keith is from NYC, black, and his family is struggling finically. Both are close in age – not having graduated high school when the book opens. Both are basically innocent.

In some ways, Keith is a little luckier because NYC has/had programs that could help him and the idea of punishment was changing. This is not to say that his race, economic background, and neighborhood did not play a role in his charge and his subsequent interaction with police and the system. It is though Keith that Bazelon illustrates the cost to the average person when it comes to the justice system. It isn’t just the charge, but the time that is put on hold, the missed wages, the struggle to move forward on a good path when everything seems to be or is out to get you. Chances are that if you live in a big urban area, you know someone like Keith.

Noura’s case is different and illustrates what happens when a prosecutor doesn’t play by the rules and abuses power. (Noura’s case was also first reported on Bazelon for the New York Times). She is charged and eventually found guilty of murdering her mother. She spends years in jail. You might not know someone like Noura, but Noura’s case also illustrates how power can be horribly abused, and her friendships in prison illustrate, as Noura herself points out, that she is hardly alone in suffering a miscarriage of justice; she just has the benefit of being white.

What is also important is that the long-lasting effects of being charged are shown. It isn’t just the time and money that is loss, but the emotional and mental damage as well. Bazelon does directly tackle how race plays into what happens. The stories of Keith and Noura also lead to discussions with DA’s, defense lawyers, judges, and activists, some good, some bad – some pushing for change, some frustrated because their hands are tied. The book isn’t anti cop or anti-justice – it is pro-humanity.

Reading this right after finishing The Cadaver King and the Country Dentist is enough to make you want to go around smacking people. Thankfully, Bazelon includes a step by step proposal for reforming the justice system, including what people who read her book can do. Not only is the planned sketched out but she also provides cited examples of each step working