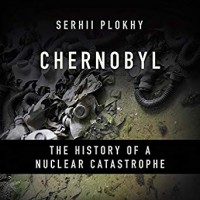 I vaguely remember the Chernobyl disaster.  I remember hearing about it on the news and being scared.  That’s about it.  Plokhy’s history rectifies that.

The book opens with the Swedish discovery of the disaster and includes a detailed account of the disaster itself.  Not only the events leading up to it but the human cost of those who fought the faire without knowing fully the risk they were taking.  The first tragedy is what happens to the firefighters.

But the book isn’t just a detailed account of the day of.  Plokhy traces the development of the plant, the conflict between local and Soviet authorities, the impact on literature, and, of course, the lives of those who lived in the immediate zone, who were forced to leave home for what turned out to be forever.

Chernobyl is now more commonly seen as a place that has gone back to nature, but Plokhy’s book shows us the terrifying reason why that happened.  The story is part politics, part science, part accident, but tragedy for those who lived through it. The fallout also occurs when an intrepid reporter discovers that the resettlements are quite as safe as they should be.

Plokhy’s description about how the Soviet and international press reported the incident is also very interesting.  Part of the response comes with from a competitive drive with the US and the rest of the West, but also to fit into a larger Soviet narrative.  This is true when it comes to every aspect of the incident and how the government and the people responded to it.