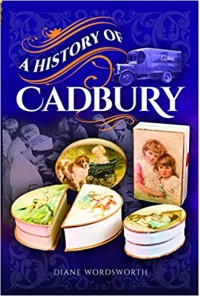 Disclaimer: ARC via Netgalley and the publisher in exchange for a fair and honest review.

This book is about chocolate and, therefore, it is yummy.  But even if you are one of those people who doesn’t like chocolate this is a book that you should enjoy.

In the United States, Cadbury is most likely famous primary for its Cadbury Eggs – or for the commercials for those Cadbury Crème eggs, but the company is actually famous for much more.

Okay fine, but even if you lack taste, this book is delicious.

Wordsworth traces the company’s history from its start in Bull Street in Birmingham in the 1820s to the most recent corporate sale with Kraft.  In 1824, John Cadbury with a stake from his father, a draper, opened a tea shop that also sold cocoa beans.  The Cadbury family was a Quaker family, and John Cadbury was also a temperance advocate, which was one of the reasons he put forward chocolate as an alternative to drinking.  (He obviously never had a Guinness and chocolate milkshake).

Eventually the firm was passed down to his sons Richard and George who saved the business by expanding it and refining it – in part because of Dutch tech that allowed for the making of better chocolate.

However, it is important to note that the Cadbury family was far different than many in today’s heavy capitalist society where workers are being replaced with machines or losing wages and benefits.  The Cadbury family actually seemed to have cares for their workers.  What is most surprising is the emphasis on health and learning that the firm gave its employees.  The workers had sports field, class, doctors, and dentists.  It is turn that at some point there were some strange rules – like the ones about married women – but considering the overall care and concern that the family extended to employees.  Wordsworth does an excellent job of making this attitude clear and connecting it to the family’s Quaker’s beliefs.  She also discusses the two ways such care could be seen – Patriarchal or patriarchist.

The emphasis of this book, therefore, is on what Cadbury was and what in some ways was lost in the later mergers and buy outs.  The later mergers of the firm while dealt with are not dealt with in depth.  This leads to more of a sense of loss when Kraft enters the picture.  It is impossible to think of a big business being so vested in the success of their employees on such a level.

In part, one does wish there was more analysis about the changes or differences.  To be fair, though, it is entirely possible that such a criticism could be unwarranted.  Wordsworth seems to have been contracted for a slim volume so the cutting of information must have been difficult.  So, if it is a fault, it is more to do with contract.  Wordsworth makes up for a bit of the gloss at the end by including a further reading list.  She also includes several documents – such as testimony from a libel trial – and interviews with employees.