Read this as well (or watch it) 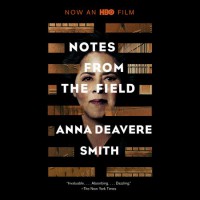 I was lucky enough to see Ms. Smith performed this when she was workshopping it in Philadelphia. If you have not seen the HBO film or a live performance, I struggle recommend that you do.

Ms. Smith’s Notes from the Field is part of her series of plays that she bases on interviews or archived footage. In this case, the focus is on the school to prison pipeline. Her characters (and I use that term extremely loosely, every character is real person. You have not lived until you see Ms. Smith act James Baldwin) include students, activists, community leaders, and teachers. The collections between each person’s monologue is clear but not articulated.

In part the focus is on violent behavior in students and the results of the largely institutional violent reaction to black and brown bodies. Hence the inclusion of a young girl who was arrested for simply filming a deputy throw down a classmate. The focus isn’t on the sexuality of young teenage girls, an issue that gets media play. It is focused on violence and how it effects all youth. Both girls and boys. But it is violence and treatment that is allowed by society which makes the play all the more damning.