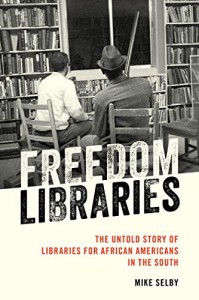 It is well known that denying knowledge is a way to keep a group down or enslaved. It is the reason why teaching a slave to read was crime. We have, in some senses, over looked the power of education not only in the Civil Right movement. Luckily this didn’t sit well with Mike Selby.

While most people know about the Freedom Riders, but the libraries that were set up in towns and the education that the places provided are less well known, though the people who ran them faced the same level of violence and harassment. Selby traces various libraries in various states as well as one that was run in Philadelphia.

Selby provides biographical details about the various people who ran and set up the libraries as well as interviewing people who used them. In some cases, the libraries were more popular than the university libraries that they resided next to. The book opens with Selby providing background into how various public libraries and the ALA itself viewed Jim Crow laws and access to books (knowledge). This background shows not only why the Freedom Libraries were needed but also how knowledge was held back from African-Americans. Though, there are some surprises in some states, and sometimes rather strange partnerships.

The sheer opening of a library was a struggle from getting the books to finding a suitable building. The libraries were also concealed about diversity well ahead of the curve – in particular looking for books about black history and by black authors. The books were donated, and in some cases, even collected by young children. Selby, like many a book lover, seems to be increasingly frustrated that there is no list of titles for any of the libraries, though this is hardly surprising. While Selby does mention popular titles in the various libraries, I found myself wishing that there was a comprehensive list of known titles at the back of the book.

Selby also details the resistance and violence that the librarians faced, including times when the places were bombed. The cover of the book drives home this point for it is of two men guarding a Freedom Library.

Selby’s writing style is that of a reporter. His prose quickly grabs the reader and the book actually flies by. The structure of the book works quite well and Selby takes the time to explain why different states called for different approaches.

If you are interested in libraries and/or the Civil Right Movement, you should read this book.