GL at the edge of the galaxy 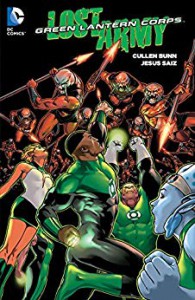 I've never been much of Green Lantern fan. I don't know why. I didn't really like GL until I watched the Justice League cartoons that had John Steward as GL, and then I liked them. Maybe because John seemed so much more human and relatable. I don't know. I picked this up because I read the free sample or sneak preview that was for the kindle and really enjoyed it.

The story is about the Lanterns being sent somewhere, they don't know where, and we start the story with John and his group struggling on an unknown planet. The story is pretty much fish out water for a bit and then it starts to raises issues and questions. There are in fact two stories- the Green Lantern story and the one about John in the army. The story is entirely from John's pov.

One of the things I liked about the preview was the male/female ratio and while this changes a bit as the story goes on (sadly), I did enjoy the fact that the women are not displayed as sexy big boobed appendages. Nice artwork.

The story could be a bit tighter. The plotting at times seems a bit - predictable, too much one high, than one low type of thing. But I did enjoy it. John's struggle, while dark, does make him relatable, and the plot raises interesting moral questions that seem to actually to be considered by the characters.