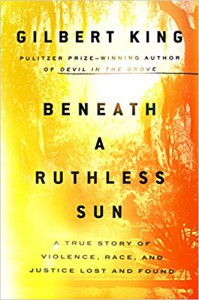 This is not a bad book. It just isn't as good as Devil in the Grove: Thurgood Marshall, the Groveland Boys, and the Dawn of a New America. Sun follows the story of a young disabled boy who is imprisoned for a rape he did not commit because the "scandal" of a well known, respected wife of a man of power by a black man would be too scandalous.

Never fear, King condemns the racism at work in the town as well, and in many ways the story is also the story of the young black men who were also attacked by the sheriff because of their race. Perhaps this is why the story feels a bit too disjointed. It almost seems like there is too many focuses - the main focus is on Mabel Reese.

While Kimberly Farr is an excellent reader, I had gotten so use to Peter Francis James from the previous book that it was a little disappointing. Though the choice of Farr does make sense.

I really do hope that King continues to focus in on this era of history because it needs to be more recognized - in part because of the comments Trump has made about mental illness, but also because knowledge of the abuses of power by the law in the Jim Crow era is not widely known in the general, white, population. Considering the distrust that many communities have towards police, it is important to know history like this.