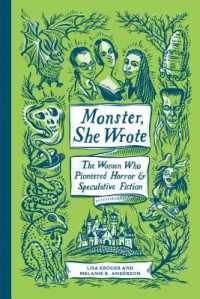 So this was a My Book Box selection.  I can't remember what month because I am behind.  But it was cool because this book was on my list, and My Book Box delivered again.  The non-fiction selections are usually pretty darn good.  (The Mystery ones are a little more hit or miss, but more often than not a hit).

So this book is about the women who invented and contributed to the horror and gothic genres.  Therefore the book starts with writers other than Mary Shelley.  The choices are basically English and American authors, and while the famous names are dropped (ie Anne Rice, Jackson, Shelley), there are enough lesser known writers mentioned.  The book will also add several other books to your tbr pile.

While the main writers mentioned are English and American (majority white), there are several women of color and international writers mentioned as further reading  as well as the last few sections of the book that are less profile based.  Butler is mentioned more than once as is Due among others.

There are some strange bits though.  While Anne Rice gets a profile, Chelsea Quinn Yarbro is only mentioned in passing, which is a bit strange considering that the Count Germain series is the longest lasting vampire series.  While Tananarive Due is recommend more than once (at least three times I believe), she really should have had her own profile (and Joplin's Ghost should have been mentioned).  It was also strange that Datlow and Windling's collections were not mentioned in any of the further read bits.

Still it was enjoyable.