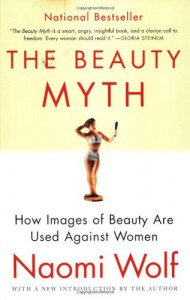 I probably should not have tried reading Mercedes Lackey’s Fire Rose after reading this book.  That novel, a retelling of Beauty and the Beast, has a woman as the central character.  The woman, Rose, doesn’t realize how beautiful she is and looks down her nose at other women whom she deems to have looks but not brains.  Rose has brains (well, she thinks she does) but doesn’t think that she has looks, surprising considering how much effort seems to be put into assuring the reader that despite her claims Rose is, in fact, a looker. Wolf has said a bunch of stupid and inane things since this book was first published and is probably known today by most people as the woman who (1) advised Al Gore how to dress (2) wrote a book about genital or (C) accused Harold Bloom of attempting to rape her, years after the alleged event. [Mr. Bloom denies it, and in fairness, the story seems strange and unbelievable].  This is somewhat sad because there is plenty in this book to recommend it, and it has impacted books that have come after it.

That isn’t to say this book is flawless.  It’s not.  I would’ve preferred more statistics.  I wondered why the section on face cream sounded like an anti-abortion pamphlet meets urban legend.   Wolf’s experiences at college were gone into way too much.  Paradoxically telling us she was a victim of the myth as well as rising above it.  For record, Elizabeth Bathory also killed noble virgin girls.  It was the virginity that was the draw.

In fairness, too, most of the arguments seemed to be supported with examples from white women.  The question of race is either left out or subsumed into the larger myth.  And this is a weakness.

True, Wolf couldn’t discuss whether Beyonce was the break out star because of her skin color or her talent, but surely there must be something applicable example from when this book was first written.

That said, there is much in the book to at the very least make the reader think.  The book is at its best when Wolf argues that in a secular society beauty has become a religion.  Her comparisons really do give the reader something to think about.

And what is going on with Dolce and Gabbana?