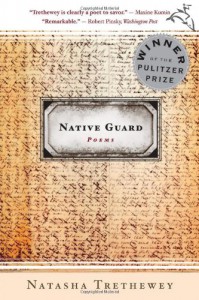 The opening poem of Tretheway’s collection, “Theories of Time and Space”, contains the lines, “Everywhere you go will be somewhere/you’ve never been . . .”    This is what the poems in this collection fulfill.

Tretheway’s book is dedicated to her mother, and many of the poems speak dearly and closely about her mother’s past, death, and grave.  These poems are visceral and personal.  “What is Evidence” about her mother’s abuse at the hands of Tretheway’s step-father or “Myth” about her feelings concerning her mother’s death.  This gives way to the second part considering Mississippi history.  This selection includes the title poem.  “Native Guard” is a diary of a black Union solider, a member of the Louisiana Native Guard, a regiment made up of former slaves.  The poem is beautiful not just for its mediation like quality but for the history it brings to lit.  In a country where most Americans think of the movie Glory as the be all and end all of the black soldier’s experiences in the Union army, Tretheway’s poem shows a more complex and shameful treatment.

The last section is the most riveting as it deals with the conflicts of personal history and feeling and societal history.  It is about belonging but not belonging, of the struggle to find identity and to follow what one wants.  It concerns not only Tretheway herself, but her parents were a bi-racial couple at a time when such a marriage was illegal.

While many of the poems deal with race in America to consider the poems as only about race would be incorrect. In many ways, the poems speak to the experience of many Americans, regardless of race and gender.  It is though reading this collection that you come to two conclusions.  The first is that without a doubt Tretheway deserves her post as Poet Laureate of the United States.  The second is that she is timely choice, not just for her heritage or her involvement with public school students, but because her poetry does raise questions about race as well as how society views race.  It is a conversation that many in America skirt around, hide from, or just try to ignore.  Tretheway raises and contributes to the much needed conversation.